Can you travel on an airplane while pregnant? And if so, up until what stage in your pregnancy is okay? And what happens if something happens? 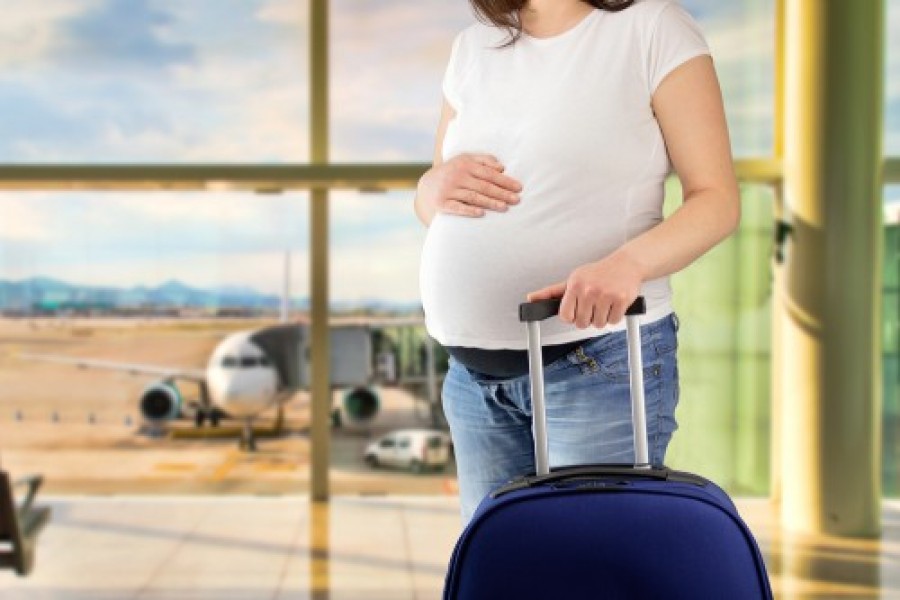 In medieval times they really didn’t let pregnant women do anything for fear that it could harm them or their precious cargo. They generally just had to sit with their hands laid prettily in their laps, and for the last three months went into confinement in bed locked up in a room away from any possible dangers.

These days through medical knowledge and general practicality pregnant women are able to continue doing a great many things throughout their pregnancy including working, exercising and thankfully bathing.

One thing you might not be sure about however is flying. Can you travel on an airplane while pregnant? And if so, up until what stage in your pregnancy is okay? And what happens if something happens?

In medieval times they never let pregnant woman fly in planes for a very good reason; planes weren’t invented yet. It’s not as straightforward these days, and I will try to clear things up a little bit for you. 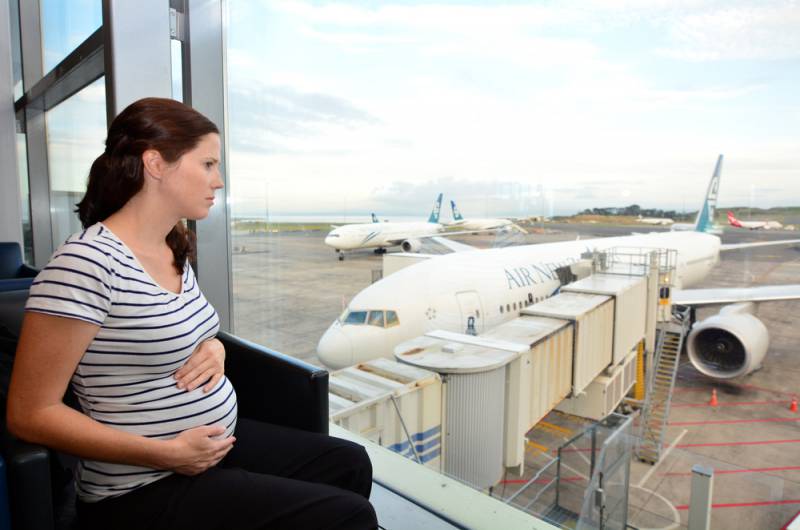 Can you fly while pregnant?

For your own comfort and safety

Yes, you can. My main problem with flying while pregnant is it usually took me several wines to cope with flying pre-pregnancy, and now I didn’t have this calming option available to me. But there is really nothing else to be worried about.

Generally there are no risks to you or your baby while you are flying and you are most likely to be safe for the entire pregnancy. For most women the only risk that could happen is them going into labour just because the baby may decide to come early. Most women will not fly after they are about 36 weeks pregnant for that reason. But in normal and low risk pregnancies flying will not harm your baby or induce labour.

However some pregnancies and conditions may make your travel a little bit more risky. If you are considering air travel while pregnant you should always check first with your treating doctor to ensure that you are not at risk. Some of the things you may need to consider are:

High blood pressure and increased risk of blood clotting. You are more at risk of deep vein thrombosis, but you can wear special compression socks to combat this. Be warned, these socks are not at all attractive, but I guess that’s not really the point.

If you suffer from bad morning sickness it is not advised that you fly, as air travel can make this worse. You will also be in more trouble if you become excessively dehydrated because of this condition during the flight.

If you have a history of miscarriage or ectopic pregnancy your doctor may advise that you have an ultrasound before travelling to double check that you are ok for such travel.

Danger from insects: There may be some risk in travelling to some parts of the world, particularly where insect-borne viruses are a concern. Apparently pregnant women are more likely to get bitten by mosquitoes than other women; just another thing we’ve got going in our favour! Some destinations also might require you to take certain vaccinations which are not recommended during pregnancy.

Your doctor can discuss all of these risks in relation to your specific pregnancy. 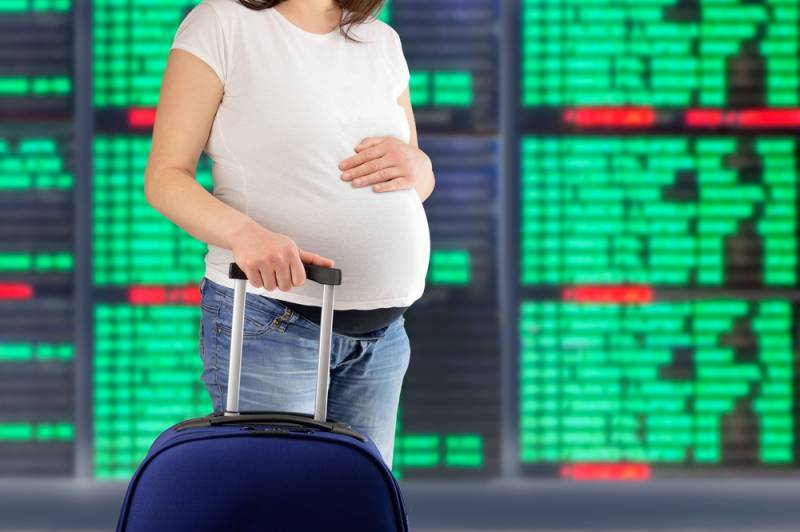 From the airlines’ point of view

Yes you can. And for a long time you don’t need to tell the airline anything about your condition, or really take any additional precautions.

You may have to fly for work, or have decided to give you and your partner a last minute babymoon, but these days flying while pregnant is very common. During the first and second trimesters you can fly without alerting the airline about it or seeking any particular conditions.

After 28 weeks you should carry with you a letter of medical advice (or a medical certificate, the template for which is often on the airline’s website) from your doctor stating that it is ok for you to fly. With this, some airlines will let you travel on short flights right up to your due date. For longer flights airlines generally will not let you fly after 36 weeks, earlier if you are expecting twins or more.

It will vary from provider to provider and you should check your specific airline directly for the most accurate information. 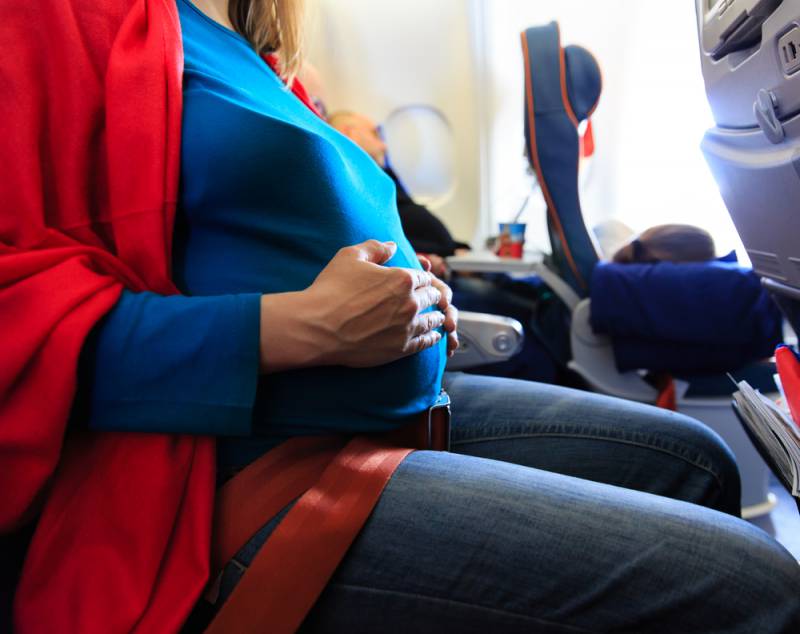 Can the airline refuse you permission to fly?

You may have seen a story in the news recently about an outcry when a pregnant woman was refused permission to board an airplane to get home from Sydney to Melbourne. The silliness of the situation stemmed from the fact that the same airline had flown her up two days earlier and knew about her condition and her intended return flight.

Is this legal? We are all probably all a little bit self-conscious by how big we are during our pregnancy; what if we arrive at the boarding gate and they take one look at that enormous belly and say ‘No way.’ Can they do this?

At this point in time, the airline can set the rules about who they allow to fly, although some experts will say it is discriminatory against women on both counts of gender and pregnant condition. People with heart disease or high blood pressure do not have to similarly declare themselves to the airlines.

The greatest risk to a pregnant woman mid-flight is the inconvenience of going into labour, which is generally not great for the woman, the baby, the other passengers or the airline. The airline is most likely trying to avoid this from happening.

You might have a legal case to raise if you have been refused permission to board, however this will not help you in the moment when you are trying to board, so you might have to put up with the airline’s policies at this time.

Birth on a plane

The biggest concern with going into labour on a long flight seems to be what nationality the baby will end up being if born over international waters. There is also a question of whether she will be eligible for free travel on that airline for life. Not many people seem to wonder what happens practically in terms of the birth however.

What happens is generally what happens anytime a baby decides to come at an inopportune time such as at home, in the car or on the side of the highway; you do the best you can. Flight crew are not generally trained for assisting with giving birth, just general first aid, and will call for help from any passengers with medical training. A decision will be made if an emergency landing is possible or even necessary.

The majority of births are straightforward and in some cases the baby is born with no disruption to the flight at all, and the plane lands at its planned destination with one extra tiny passenger and a pretty exciting story. 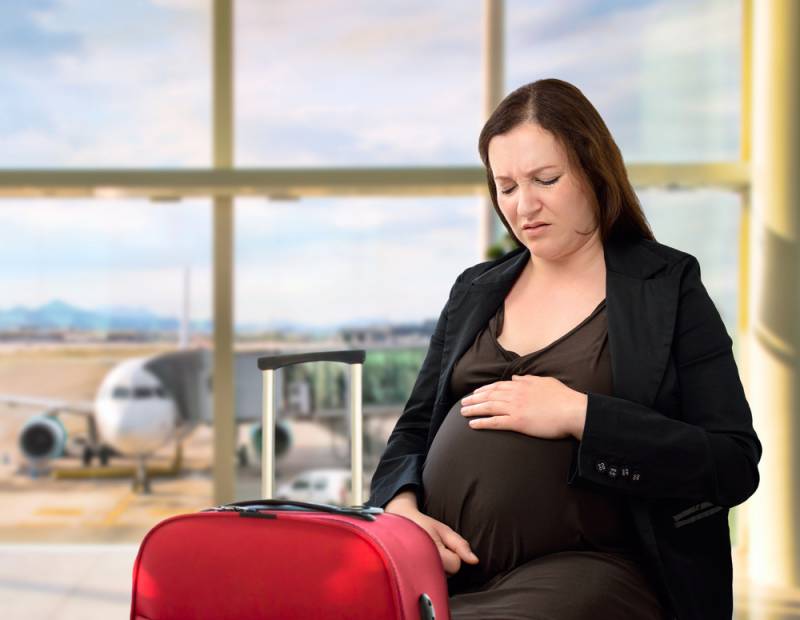 How to make travel a bit easier on your pregnant body

Go first class! Actually this is always good advice. But if your budget doesn’t quite stretch that far, you should still try to make yourself as comfortable as possible. Ideally you should restrict any travel to before you get too big. The second trimester might be best because you will be over all the morning sickness and not yet too massive.

Keep Hydrated: You should keep well hydrated on the plane and walk around as much as possible. It would be beneficial for you to get an aisle seat so you can get up to walk around easily and also for the twenty-seven times you are going to need to go to the toilet. Plus you’ll need to stand up anytime anyone in your row has to get out, so you should really get your circulation going nicely.

Healthy meal choice: If meals are to be served make sure that there are options that are safe for you. Things often served include ham and other deli meat, sushi, and pre-made salads which are all on your no-go list. You are generally best to have things really hot, and a lot of airlines like to serve things really lukewarm. You may wish to bring your own safe healthy food options.

Travel Insurance covers pregnancy: You should ensure your travel insurance is up to date and covers your pregnancy, possible complications and an emergency birth. It would also be good if it covered getting you back home as quickly as possible.

Finally; free flights for life for your baby?

If your baby is born during a flight, urban legend has it that some airlines have given out free flights to the baby, either for life or until they are 21. None of the main Australian ones have come through on this, but apparently Virgin Atlantic may have done so once. It’s probably not a good enough reason to try to give birth on the flight however. 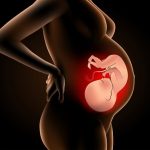 How the Position of the Foetus affects Labour and BirthPreveious 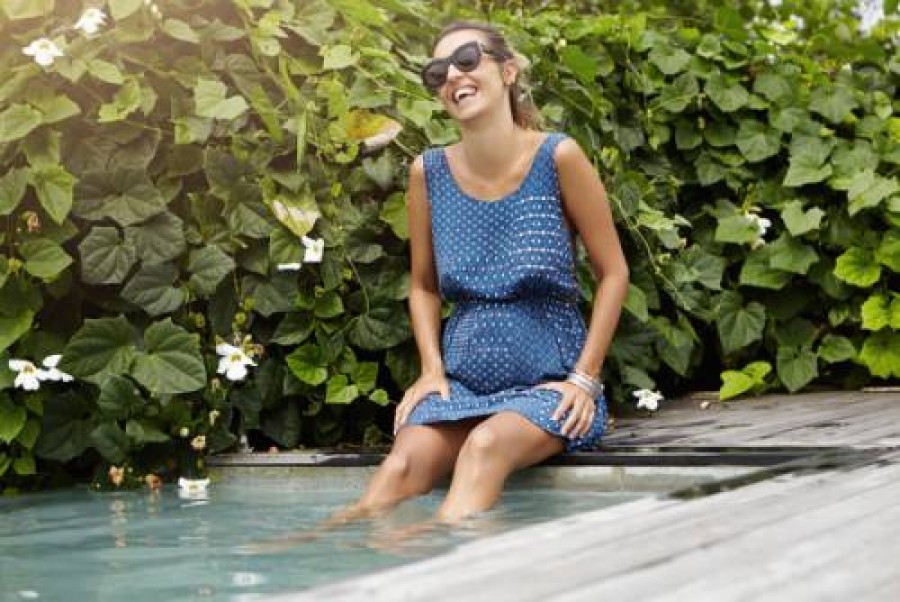 First Trimester of Pregnancy (0 to 12 Weeks)Next